The Ballad Of The Chick Fil-A Betrayal By Mike Church

The Ballad Of The Chick Fil-A Betrayal

From Mike “The King Dude” Church:

I Told Ya So: Chick Fil-A Throws Christians Under The Profit Bus

With the recent news about how Chick Fil-A has caved, lets take a trip in the way back machine. I called this one 7 years ago when the company was first confronted for its lack of health insurance coverage for same sex “married” employees. People still think that Chick-Fil-A held that line and told the Gaystapo™ to go pound sand, they didn’t. Instead they quietly changed their policy to fit the Rainbow Purification League’s demands and Boobus Christianus Americus was never the wiser. This is why it never made sense for the LGBTQ crowd to be so hostile to Chick Fil-A, but I always suspected this was a sort of Quid Pro Quo i.e. “we’ll pretend you should be outraged at our existence if you’ll stay outraged”; this was a cynical ploy to exploit the  loyalty of Christians looking for ANY corporation to stand up to The Gaystapo™ butChick Fil-A was never that company and now they have proven it.

Just wait’ll next June’s “Pride Month” and Chick Fil-A’s “Rainbow Wrap and Pride Fry Combo”; for them to now feature their homosexual and transitioning work force in their ads and of course homosexual and transitioning sob stories on the now famous red couch of sentiment featured in their TV ads. Chick Fil-A should ask the Boy Scouts what cooperation with these never contented, demonically inspired maniacs will get you. 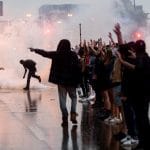